After a long hiatus, I finally have a chance this spring to turn back to spatial approaches to Ireland. I thought it would be worthwhile to revisit a question I raised: where to go for downloadable Irish GIS data?

Certainly, a lot has changed since 2009 in the world of digital dissemination of spatial data. Visualization of data is everywhere, with some very robust tools available, many free, to either conceptualize data in a spatial way, or to manifest spatial data in visual form.

Irish data appears not yet to be nearly as widespread as, say, that for the U.S.--at least not in a form that is publicly available, downloadable, and usable in GIS applications. But there are some resources out there, some of which have actually been available for a time. I list them below, and will update from time to time as I find more.

The CSO at the moment is ahead of the curve in providing support to researchers interested in spatial analysis of key Irish demographic characteristics. They have a several sets of vector files in shp format based on 2011 boundaries covering a variety of themes. These aren't historical, but for some boundaries like county, province, and even electoral division, they are close enough for some visualizations.

The principal mapping service for Ireland, OSi offers a variety of digital data including historical data, DTM elevation data, boundary files, and raster images, but for cost. It is possible they make some of these available for academic use for free, but the data I've used (although excellent) did come with a charge. http://www.osi.ie/Products/Digital-Products.aspx

A nice little gem that I wish I had known about a few years ago. A University of Portsmouth project (SN-4999) from back in the early 2000s produced a set of maps for Ireland's Poor Law Unions and Baronies for 1841-1871. These are vector files and, best of all, they present historical boundaries. They are available via the UK Data Archive (for which registration requires a little extra work for non-UK residents but can be done). The files are in CAD .dxf format, but ArcMap seems to make short work of projecting them. http://discover.ukdataservice.ac.uk/catalogue/?sn=4999&%20catalogue

They require extra work to properly project and ortho-rectify, but both the New York Public Library and the Rumsey map collection do in fact have high-resolution scanned images of Irish historical maps that can be helpful entrypoints for finding historical features.

In addition to the above, the following are not strictly historical, but might be useful in deriving some kind of historical boundaries or as a basis for historical analysis:

This site has some files containing relevant topographic, built, and environmental features, including railways, elevation, and a very detailed gazetteer. Ireland and Northern Ireland (see under UK) listed separately: http://www.diva-gis.org/gdata

A wide variety of natural and built features of the environment, including historic parks and gardens: http://www.doeni.gov.uk/niea/other-index/digital-intro.htm

A few GIS data files for current administrative boundaries; as with the Irish CSO, the real function is to provide a base for displaying current demographic statistics: http://www.nisra.gov.uk/geography/home.htm

Via the University of Edinburgh. I haven't tried to obtain a log-in, but it claims to offer data for GIS. If it covers the UK, it may cover Northern Ireland: http://digimap.edina.ac.uk/digimap/home 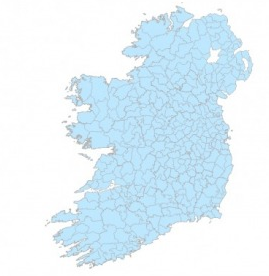