Much has changed in the world of Irish census microdata since the appearances of the 1911 and 1901 in a searchable online database by the National Archives starting in 2009. This has been a fantastic resource, not least because of its easy searchability and free access. The fruits of the availability of this resource are starting to be seen, most notably in an article by Dylan Connor, Gerald Mills, and Niamh Moore-Cherry resulting from an extended study in clever spatial analysis combined with the power of the 1911 data (see "The 1911 Census and Dublin City: A Spatial Analysis," Irish Geography 44:2-3 (2011): 245-63).

A product of a collaborative project by the MA students of UCD's School of Geography, Planning, & Environmental Policy, this particular article attempts to examine the demographic characteristics of inner Dublin using the 1911 count. With a record count of 240,000 individuals, this was no small undertaking, not least in having to interpret and encode the wide varieties in occupational labels that inevitably arise in a diverse urban work force. The immense difficulty in trying to sort out what precisely census takers were seeing in 1911 when they applied terms like "general laborer," for example, can be a real headache. As the authors revealingly note, one city ward alone offered the daunting task of sorting out 7000 different reported occupations.

But what really sets this study apart is its geocoding of its individual records at the level of street address. The census forms list a street and house number for each household, but because of the disappearance of buildings and the renumbering of houses (or even renaming of streets) over time, the team could not simply provide a modern geospatial coordinate based on the 1911 information. To exacerbate this problem, as with any urban area, the team was presented with a good number of poorer inhabitants of the city whose physical address was often recorded imprecisely. A lot of leg work in identifying changed names went into overcoming this problem, but the team also employed a creative solution in which it matched street locations, and then approximating the missing house number's X,Y location using the two (known) X,Y endpoints of the street.

Among the fantastic advantages of census microdata is that new questions can be asked of the data that were not asked by the original census reports when they were published following the censuses. Thus, while a basic sense of the occupational structure of the city can be gleaned from the 1911 census reports compiled by the government, new queries about aspects like spatial distribution are possible through access to individual-level data. This study contains a good example of this. Connor, Mills, and Moore-Cherry point out the unequal distribution of the population: 50% of the city's people occupied a mere 20% of the city area, essentially the crowded and poor regions of the northeast and southwest neighborhoods. These areas were also very young, and many of the higher numbers of children and teenagers under 15 that made up nearly half of Dublin's population were concentrated in these same areas. 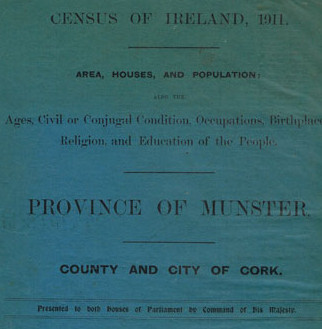